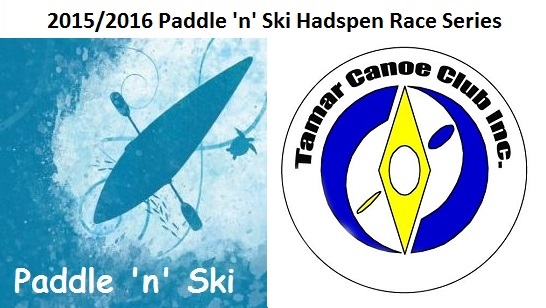 The Paddle ‘n’ Ski Hadspen race series for 2015-2016 has been run and won, with plenty of improvement and plenty of paddlers getting out and having fun on the water. With 206 race results from 34 different paddlers and about 90 personal bests in those races. Some paddlers knocking minutes off every couple of weeks while other more established paddlers pushed to the limit just to get a personal best.

We had the introduction of a sponsor, Paddle ‘n’ Ski, with Phil and April making the trek up from Devonport most weeks, and giving us a good bit of competition. There was a new trophy up for grabs the perpetual rudder, which all paddlers were vying for. The eventual winner of the handicap series was Bill Williams, who paddled a creek boat every week, he never made it look easy but was always on the improve. Second in the handicap series was Geoff MacQueen, who has improved out of sight from his first few weeks of racing where support strokes were his main stroke, and finished off looking comfortable and fast in his boat. Phil Nelson was third in the handicap series with some big improvement in the back half of the season moving him rapidly up the table. The points table can be seen below all other times can be seen on the main Hadspen page.

Paddle ‘n’ Ski also provided a Stellar paddle and Stellar ski discount to giveaway to whoever was worthy. It was decided that an end of season raffle was in order, but you couldn’t buy a ticket you had to earn it. Every time you helped time the race or improved your personal best you got an entry, we ended up with 104 entries. The lucky paddler was Alex Robinson, congratulations.

The Paddle ‘n’ Ski Hadspen Race series will be back again in October 2016. In the meantime Phil Nelson is running a fortnightly Handicap race (Sunday 17th April is the next race) on the Mersey river (from Ellimatta Boat Ramp up to the Waterfront Cafe and return) of 6km with shorter and longer options available. The Tasmanian Canoe Club and Derwent Canoe Club both hold winter flatwater race series (5 and 10km options). Tamar Canoe Club also has the Ben Lomond Descent on Sunday August 7th (Go Downhill Grinning). Hopefully we will have some rain so the whitewater paddlers keeping fitness up over summer have something to paddle. There are plenty of events over the winter so there are no excuses to not get out there and have a splash about.